Steve Jobs had a huge impact on my life.

My first computer was an Apple ][+.

And that was my first exposure to Apple. I learned to program in LOGO and BASIC on my Apple ][+, and played a lot of games of Gorgon and Zork on its black-and-white screen. I think I acquired my first copy of Gorgon from my friend, Matthew, who was in the same programming classes with me.

The computers I used in college were all Macintoshes: a LC, a PowerBook 145, and a Performa 630 (of these, the PowerBook was the best). The printer I used with these was a StyleWriter (which was s-l-o-w). Two of these Macs went on to help friends with their computer needs. I still have the PowerBook, though I’m not sure it still runs.

The PowerCenters were decent clones, if a bit ugly and with suspect power supplies, but they were affordable. The iBook was bought shortly before I left for a month-long stint volunteering at the 2002 Olympic Winter Games, and it lasted a long time. The G3 iMac was a hand-me-down that served us well when we first moved to DC.

The G4 iMac, PowerBook G4 and Mini still chug along in The Burrow – hardy machines, these, given that the newest of the lot is from 2006.

I’ve owned three iPhones: the original, a 3G and a 4. The first two were lost – I’m trying to keep the latest one within sight for a while longer. 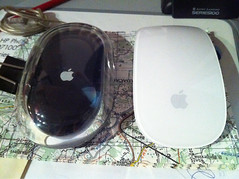 This could just be a rundown of “the Apples of Rudi’s life,” but there’s more to it than that.

I can thank Steve Jobs’ products for my job: I work with a Mac every day, and I support Macs (and Windows PCs) every day.

I can thank his focus on regular people as the ultimate users of his product for my preferences in user interface: one that works simply, is consistent, and lets me get work done. It’s programming for people, not programmers (and having worked in a Windows development company in the past, I’m keenly aware of what programming for programmers can bring: ugly UI and inconsistent operation, with nothing intuitive – a far cry from the Apple ethos).

I can thank his willingness to keep a focus on the long haul: following things to their conclusion, having a vision, ignoring the naysayers and throwing his all into his mission. It’s something I need to remind myself of fairly often these days.

I can thank him for making technology sexy. I had the good fortune to attend one of his keynote addresses (known to Mac geeks as “Stevenotes”) at Macworld NY in 2000 (the mouse on the left in the picture was the “party favor” from that speech). I queued up early with my friend, Sam, got a seat in the Javitz Center, and heard Steve talk about all of the new Apple wares. It’s said that he created a bit of a reality distortion field in these speeches, and a lot of times you’d leave feeling like the future is now, and wonder why, many months later, things wouldn’t be just as he said.

Little did I know, Steve was looking further down the road than any of us. It’s easy to see now – 20/20 hindsight is amazing.

Having Steve silenced at a young age is tough to fathom. He leaves behind a wife and kids. The halls of One Infinite Loop in Cupertino are likely far more somber these days. And fans like me, for whom Steve was a visionary and hero, are left with heavy hearts.

There are a number of appropriate quotes from Steve that ring true with me, and I’ll share them here:

“A computer is the most remarkable tool that we’ve ever come up with. It’s the equivalent of a bicycle for our minds.”

Given my affinity for the two-wheeled machine and the computer, this is fitting for me.

“Simple can be harder than complex: You have to work hard to get your thinking clean to make it simple. But it’s worth it in the end because once you get there, you can move mountains.”

Simple is good – something to remember, especially in chaotic times.

“You can’t connect the dots looking forward; you can only connect them looking backwards. So you have to trust that the dots will somehow connect in your future. You have to trust in something — your gut, destiny, life, karma, whatever. This approach has never let me down, and it has made all the difference in my life.”

“When I was 17, I read a quote that went something like: ‘If you live each day as if it was your last, someday you’ll most certainly be right.’ It made an impression on me, and since then, for the past 33 years, I have looked in the mirror every morning and asked myself: ‘If today were the last day of my life, would I want to do what I am about to do today?’ And whenever the answer has been ‘No’ for too many days in a row, I know I need to change something.”

I need to keep these two in the forefront of my mind, I think, just to keep me moving in the right direction.

“Your time is limited, so don’t waste it living someone else’s life. Don’t be trapped by dogma â€” which is living with the results of other people’s thinking. Don’t let the noise of others’ opinions drown out your own inner voice. And most important, have the courage to follow your heart and intuition. They somehow already know what you truly want to become. Everything else is secondary.”

Cancer took you from us far too soon. Fuck cancer. But you’ve left one hell of a legacy.

And I’m very grateful for that. Thank you, Steve.