Being off the bike is a chore.

But that doesn’t mean I have been ignoring the bikes.

That said, ever since I first bought it back in 2007, I’ve wanted to upgrade the components. And this past week, that’s just what I did.

Some background: I bought the Jamis as a frameset (frame, fork, headset, crankset and bottom bracket) back in September 2007, when my 2002 LeMond Tourmalet frame broke. The Jamis received its parts from the LeMond: a hodge-podge of Shimano 9-speed stuff from 105 and Tiagra lines (read: entry-level and sturdy, but not exactly light), Mavic Aksium wheels, Specialized saddle, THE handlebar and a few other bits and pieces. I had to buy a new front derailleur, which ended up being a Shimano Ultegra 10-speed unit. 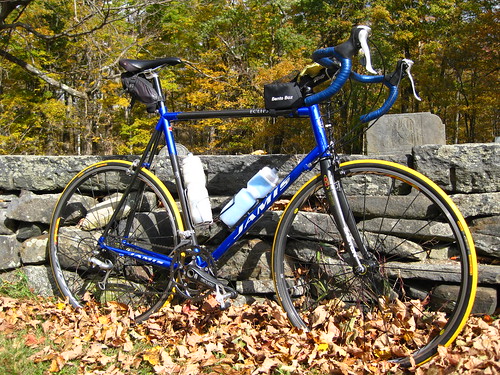 And the whole thing worked rather well. The frame is lovely, and the hand-me-down drivetrain worked perfectly well.

But once I had the Pedal Force built up with a full Campagnolo drivetrain, I fell in love with the ergonomics and reliability of the offbeat (to the U.S., at least) component company. And I secretly harbored a desire to upgrade the Jamis to something similar.

One thing that stood in the way: after Thanksgiving of 2007, the Jamis resided full-time in Connecticut. And since it didn’t see a ton of riding time, there was no real drive to upgrade the drivetrain. Not that the Jamis didn’t get ridden: it was my steed on the Harpoon Brewery-to-Brewery Ride in 2009 (my longest single-day ride to date), as well as the 2007, 2008 and 2009 editions of the Great River Ride in Massachusetts (the picture above is from the 2009 GRR).

But this past summer, I crashed the Pedal Force and cracked the frame. So while I decided where to send it for repair (it eventually went to Broken Carbon, where Brady Kappius did a top-notch repair job), I brought the Jamis back to DC with me to use as my full-time road bike. Getting more time on the Jamis reminded me how much I love the feel of a steel-frame bike (or, in this case, a steel/carbon frame).

In the meantime, I had acquired a lot of spare Campagnolo parts, and realized that I was only a few pieces away from having a complete groupset to use on the Jamis. A week ago, I acquired the final bits needed to go forward with the upgrade.

And let me tell you: it has been great to do something with my bikes again, even if it doesn’t involve riding!

So, without any further ado, here’s the end result: 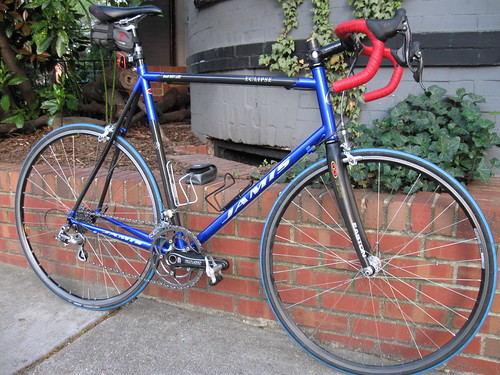 The new (to the Jamis, at least) groupset includes Campagnolo Chorus “brifters” (the combined shift & brake lever units) and brakes, combined with Campagnolo Centaur front and rear derailleurs. The brifters and rear mech used to ride on the Pedal Force – in fact, the handlebar, stem and brifters were transplanted as-is from the Pedal Force, and the setup is just right (note to folks who are new to road cycling: know your fit measurements, because it makes re-assembling your bike far, far simpler).

The wheels you see on the bike are the ones I also use with the Pedal Force, which are lighter than the Mavic units. That said, I plan on getting a Campagnolo freehub body for the Mavics so that I can continue to use them with my bikes (they are bulletproof wheels).

But you know what the best part is?

It’s that my doctor has given me the OK to start riding my bike on a stationary trainer – woo-hoo! It’s the first step back to riding on the road, and makes me happy.

(Thank you to my friend, Jeff, for loaning me his stationary trainer for my in situ training needs!)

recovery update: day 74 (back on the horse)