friday my:dc : memorial to the fallen 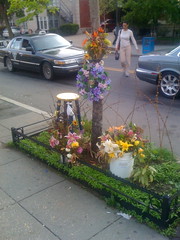 Anybody who used the Q Street exit from the Dupont Circle Metro station knew him.

They might not have known his name – many called him “Mohammed,” though that wasn’t his real name – but they all knew his knick-knack stand with the umbrellas, scarves and treats. They saw him sit on his stool, his crutch at his side, often flanked by his wife, daughter, or grandson.

They’d see him go to the local restaurants and stores at the end of the business day, collecting the bread, sandwiches, and other food that would otherwise be thrown out. The food would be distributed to the local homeless who slept in the parks around Dupont Circle, and some of the bread would be crumbled and left for his avian friends (sometimes to the consternation of the locals, who claimed that the bread crumbs attracted rats).

They would see him sleeping in his box truck on 20th Street – his home for many years.

Sakhi Gulestan died the morning of March 29, lying in the cab of his box truck. His presence is missed, as this memorial clearly shows. I particularly like the stool – it’s a most appropriate tribute to the man who many saw as part of the Dupont Circle ecosystem.

Wanna see more? Hillary, sprite, Sweetpea, and MsP are all photo-happy and willing to share their unique DC-based views.

cycling in dc: where is the love?