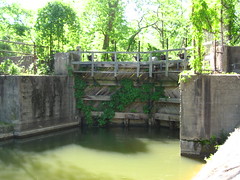 The Chesapeake and Ohio Canal is a truly remarkable, if ill-fated marvel of human ingenuity.

The canal and its towpath runs 185 miles from the District of Columbia to Cumberland, Maryland, rising 605 feet over the distance, using a system of wooden locks to allow watercraft to scale and descend the elevation changes. The canal was built as a means to transport heavy goods into and out of DC and its ports. However, it proved inefficient and was soon made redundant by railroads.

For many years, the canal sat in disrepair, and there was great pressure to demolish it, opening up the land on the east side of the Potomac to commercial and residential development. But U.S. Supreme Court Justice William O. Douglas spearheaded a movement to restore and preserve the canal as a national park and recreation trail. In 1954, Douglas led an 8-day hike along the length of the towpath, and his continued lobbying drew popular support. In 1971, the canal and towpath were designated as a National Historical Park.

On any given day, you’ll see many residents of DC, Maryland and Virginia using the towpath, either on foot, horse or bicycle. You’ll see people jogging, fishing, hiking the trails that spur from the towpath, kayaking and rowing in the canal, or watching the abundant wildlife that call the canal home: turtles, herons, cormorants, ducks, geese, bass, snakes, deer, rabbits, and many more.

sprite and I have spent many afternoons and evenings on the C&O canal and towpath, leisurely riding our bikes to enjoy the shade and marvel in the wildlife. The springtime brings an abundance of babies: ducklings and goslings are everywhere, both on the trail and in the canal, and the proud and protective parents make sure their little charges remain safe. Occasionally, you’ll see a tufted fawn in the woods, as well. 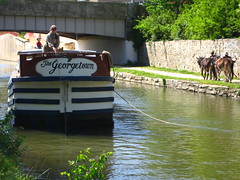 Also in the spring, two great things happen along the canal and towpath: the wild raspberry bushes and mulberry trees produce an abundant amount of fruit; and the Georgetown barge starts conducting tours of the lower stretch of the canal and its lower locks, drawn by mules as was the case in the early days of the canal.

Wanna see more? Hillary, sprite, Sarah, and MsP are all photo-happy and willing to share their unique DC-based views.