music review: “the endless river” by pink floyd (a bit of a #tbt moment)

I never thought I’d write a review of a new Pink Floyd studio album, given a few key facts:

Hell, the last time a new Pink Floyd album was released (the live P.U.L.S.E. set with the fancy LED blinker), I was in college and looked like this (my #tbt moment for this post): 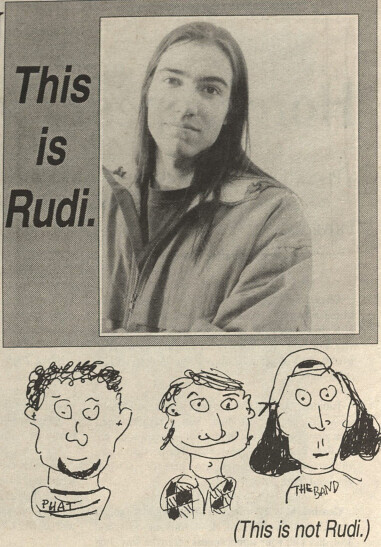 Yes, bits and bats of new stuff were released over the years, primarily in the form of bonus discs in the three “Immersion Edition” box sets for The Dark Side of the Moon, Wish You Were Here, and The Wall. But these were still reissues and not entire albums of new material (yes, my purchase of the Dark Side set marked the 5th CD copy I’ve owned of the album – collectors, I tell ‘ya). Frankly, I thought the band was truly finished, and I was completely OK with that notion.

That said, this past Monday a package awaited at my door: the new Pink Floyd studio album, The Endless River. 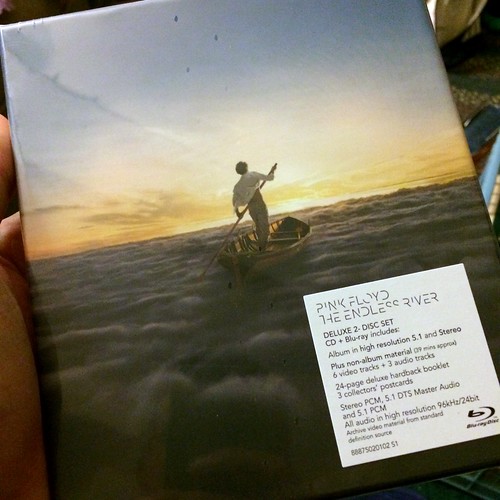 This album has been over 20 years in the making. In fact, one song – “August 68” – features an organ track dating back to that very year, recorded on the sly at Royal Albert Hall. Most of the sessions date back to the era of The Division Bell in 1993-94, with the presumed best picks used for the aforementioned album.

However, this album was originally intended (depending on who you ask and when) to either be a two-disc set (one disc of ambient instrumentals, the other featuring lyrical songs), or the precursor to an instrumental collection called The Big Spliff.

Yet these sessions ended up mostly forgotten in the Pink Floyd vaults (likely in David Gilmour’s personal archive), while the members of the band went their separate ways after the huge Division Bell tour. Wright went on to record and release his excellent solo album, Broken China, in 1996. Gilmour retired to life as a husband (to author Polly Samson) and occasional session musician. Mason worked on an exhaustive biography of Pink Floyd, called Inside Out. In 2006, Wright worked with Gilmour on the latter’s On An Island, with both embarking on a short supporting tour for the album.

(And sure: in 2005, Waters joined the other three for a one-off reunion at Live 8 – but that’s neither here nor there, other than being an excellent performance.)

So when word leaked that, sometime in 2012, Gilmour and Mason dusted off the old Big Spliff tapes and were compiling a new album, I was intrigued. Would it be any good? Would it sound like Pink Floyd, and carry on the spirit of the band? Would Wright’s playing be buried under overdubs and loops?

The answer: it’s a fitting denouement to the group, a great listen, though not without its faults.

The album is laid out in four parts (which really only works when played back on vinyl – I only have the CD/BluRay version for reference). There is only one song – the album closer, “Louder Than Words” – with any true lyrics (written by Samson). And most of the playing is by Gilmour, Wright, and Mason, with most additional backing coming from musicians who worked with Pink Floyd for the 1994 tour or for Gilmour’s 2006 solo tour.

From the get-go, the album is full of tell-tale Floyd atmosphere: disjointed voices, keyboard textures, and fluid guitar, essentially picking up where “High Hopes” (closing track of The Division Bell) left off. The first two tracks are longer pieces, at 4:27 and 6:17 in length, and flow seamlessly into each other (as is the case with all four “movements”). The purely instrumental approach hearkens back to the various pieces on early Floyd albums, like A Saucerful of Secrets, Ummagumma, or Atom Heart Mother, and it works well on The Endless River.

Wright’s keyboards are featured prominently, mixed higher than they might have been had this project been completed in 1994 or 1995. And Gilmour’s guitar is its usual lyrical self, weaving through Wright’s keyboard textures. Indeed, the three principal musicians are in fine form throughout.

In particular, Mason’s drums have never been stronger. He eschewed drum machines and sequencers for almost all of his work on The Endless River, and even re-recorded most of the parts he laid down in 1993 – to the better, I’d say.

The weaknesses are in the brevity of some of the quality shorter pieces, which deserved a bit better. The album is only 53 minutes and change in length, so there was plenty of room to expand: even on a two-disc vinyl version, you can fit up to 30 minutes of audio per side without major compression issues. Indeed, some strong pieces are featured on the bonus DVD/BluRay editions, and while a couple would have been tougher to integrate into a seamless soundscape, they could have been incorporated into the whole with a few creative production touches.

My second gripe is with the closer, “Louder Than Words,” and its sometimes ham-fisted lyrics. Don’t get me wrong: Polly Samson is quite adept at writing excellent lyrics, as she did on many Division Bell tracks (e.g. “Keep Talking,” “High Hopes”). And the focus of this song – that, despite all of the infighting that happened within Pink Floyd, the band created musical magic when they simply played together – is clearly written.

But some of the couplets and word choices seem to strain a bit. The opening line:

“We bitch and we fight”

“We curse and we fight”

to these ears. And then there’s the line:

“Let’s go with the flow, wherever it goes”

Frankly, while I know it would never happen, I would love to hear what Roger Waters would have done with this tune if given the simple “write a closing eulogy to Pink Floyd” directions that Samson followed. While I’m not sure Waters would have followed anybody else’s direction (especially Gilmour’s, given their historic animosity), I can envision a far stronger lyrical package.

Additionally, having Waters contribute to what is a tribute, in no small part, to Wright would have been a lovely gesture. Alas…

That said, The Endless River is a fine album, and begs to be listened to as a contiguous whole. In fact, it works really well when listened to in sequence with The Division Bell. I can also see somebody (not me, as I haven’t the patience) mixing the two works together to create a bit of an ur-album for the final iteration of Pink Floyd.

If this album is, as Gilmour and Mason have suggested, the true end of Pink Floyd as a band, I’m happy with that. No, it’s not in the same league as The Dark Side of the Moon, Wish You Were Here, or The Wall, but it’s no More, either.

ten on tuesday: the music died too young