I know, I know: it’s been a long while since my last update on… well, anything. For this, I apologize.

Heck, two years ago this week, I went on one of my first club bike rides after my surgery. 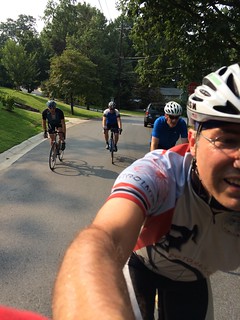 During the 2015-16 winter season, I had a really successful alpine ski coaching experience, helping my athletes qualify for elite regional championship competitions. 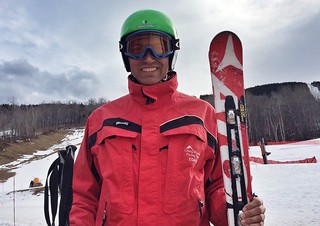 But there was a specter lurking in the background. It is a single word:

Also known as avascular necrosis, it’s a condition where blood supply gets cut off within a bone, causing the bone to die. It is caused by any number of things, and I’m not sure how I happened to develop it, but it’s there, clear as day, in my femoral head.

How did my discovery of this come about?

Let’s do a quick recap:

After my one year surgery anniversary, things were good:

See that nice, round femoral head? See the clean mending of where I was once broken in two? All good!

But then things went off the rails.

Back around Thanksgiving of 2015, I started to feel a bit of pain and catching in my right hip. It was here-and-gone stuff, and while my hip had always been a bit stiff in the morning, until then it had been able to get into the swing of things rather quickly on most days.

But by late November, the pain was more intense, sharper, and sustained. Sure, it would go away after a little while, but sometimes it would just stay there all day. Ibuprofen would calm the pain most of the time, but not all of the time. And I’d get a real nerve pinch down my adductor (I believed this to be a lingering side-effect of tearing said adductor a few years before my femur break).

As the ski season commenced, the pain continued to intensify. When I flew out to Utah for a USSA certification clinic, some of the on-snow exercises were tough to pull off. I noticed a decreasing ability to lift my right leg laterally. Every afternoon after the skiing was over, I’d spend time in the hot tub at my hotel, then stretch to try and loosen my hip, often to only semi-successful levels.

During a bike ride over the Christmas holidays in Connecticut, my right adductor would lock up in a painful way, and my hip would mis-track, causing my entire pedal stroke to degrade into spasmodic chaos – no fun. And a ski camp that occurred immediately thereafter was equally pain-laden, though skiing wasn’t too difficult to pull off without pain.

However, as the ski season continued (I was coaching four days per week all season long, sometimes more during intense racing times, from January through mid-March), the pain grew, the pain medications were less effective, and certain activities required in my work (e.g. having to drive long-ish distances to racing venues, skiing with large, heavy bundles of slalom gates, etc.) became downright excruciating. I’d demonstrate skills to my racers, trying to mask the pain in my expression. I even fell on the screws that attached my femoral head during the initial healing time, which was not pleasant at all, smarting for weeks.

Every day was masked in hip pain that would, at times, radiate down my leg. My walking gait became so labored and awkward that everybody could tell something was wrong. At least on a bike, I could be more-or-less normal, my December pain eventually subsiding as I began to ride more in the spring. But my range of motion in my right leg was compromised, catching in painful ways and making me feel like an old, helpless man.

Eventually, I had to clear things up with my orthopedist. X-rays happened, finding that one of the screws in the femoral head had been knocked through the head, the tip impinging my hip socket and possibly dragging over nerve bundles that travel down my leg. My doctor thought this could be part of the cause of the pain, and said that the screws should come out – a simple outpatient procedure.

Worrying both my doctor and me, though, was a random bone fragment that showed itself on another X-ray. As X-rays don’t show things in three dimensions, he ordered a CT scan for my right hip. I had it performed at GW Hospital, in their latest CT scanner (a very quiet machine).

When my doctor called me two days later from an out-of-town conference, I knew things were not good.

He kept it simple: I had osteonecrosis, and am facing total hip replacement.

Fuck. Damn. Shit. Why? How? Fuuuuuuuuck!

I received this news a few days before departing for a week long family vacation at Cape Cod, which left me plenty of time to digest this news and start researching my options. There is a lot to learn about hip replacement, that’s for sure!

The long and short: I’ll get back my leg length and range of motion with any hip replacement method, which is a big plus. The minus is that anything other than basic cruising on alpine skis is highly discouraged, as it can displace, dislocate, or fully break the replacement hip. I hope to speak with some elite ski coaches who have had THR to get their perspectives on living with a replacement hip as a high-level skier.

I’ve since seen a second orthopedist to get a second opinion – major medical things like this should get a second opinion – and he confirmed the same diagnosis as my original doctor. He did, however, recommend having the hardware from #projectfemur removed first (the same thing my original orthopedist recommended), allowing the femur to adjust to a non-titanium-enhanced state and to prevent possible infection of the marrow channel if I get a total hip replacement during the same surgery.

And that’s what I’m going to do this coming Monday, August 15th, with my original doctor, Dr. Faucett, doing the honors. It’s a short, outpatient procedure, and recovery should be fairly quick. Hopefully, getting the screws out of my hip socket will alleviate much of the leg pain I have these days – and it is a lot of pain, lemme tell ‘ya!

But I look forward to this next chapter of #projectfemur – and yes, it’ll need a new hashtag. I’ll figure that out sometime soon.

Once the incisions heal and swelling subsides from this upcoming surgery, I’ll assess my pain levels. And I’m going to keep riding my bike – something that’s encouraged by both doctors to maintain strength and cardiovascular health (trust me, I don’t want another pulmonary embolism or similar issue). I’ll be on crutches for a few days, then a cane, then just plain walking again.

And then the bike – definitely the bike.

It’ll be a minimum of two months before I dive into the more major procedure of total hip replacement. Hopefully I’ll get enough pain relief to delay this until spring of 2017 – and thus will be able to ski and perform my coaching duties more-or-less as usual. If not, surgery will likely happen later in the fall, and I’ll be coaching from a lawn chair. I’m up to the challenge, either way.

But right now my focus is on Monday’s surgery. And I apologize in advance to the ski team’s board of directors: I may be a bit groggy during the evening conference call that evening. Heheheheh…

35 Years Have Gone So Fast

#projectfemur: my hip is now missing a couple of bits… for the better