April 19 is not a normal day for me. Never will be.

It’s a day of pain, of emotional load, of tears.

It’s the day when, one year ago, Dave was murdered.

Time stopped that day. It stopped for many of us. Nothing made sense. Some things still don’t make sense.

A community grieved. We comforted each other. We reached out to each other, as well as to Jean and Ophelia, to offer support and comfort – even when we all needed both. We burned the candle at both ends – and the middle.

Almost all of us went to the site where the murder occurred. We all went in our own time. Some went the same evening. Others waited. I waited a few days to let my mind and heart process everything. But I, too, eventually went.

And I wept for my friend. I cursed the name of his murderer (I still do). I brought flowers. I wrote a note that I hid in the tree where Dave breathed his last breath.

A couple days later, I was joined by hundreds of friends as we placed a ghost bike in his memory. Little did we know that less than a month later that bike would be obliterated by another reckless driver. Luckily, the only fatality of this later crash was the ghost bike.

A few more days passed. There was a large gathering for safe streets at the Wilson Building. I, along with many others spoke. There was a die-in on Pennsylvania Avenue. When Dave’s name was read, I lay on the street, sobbing. 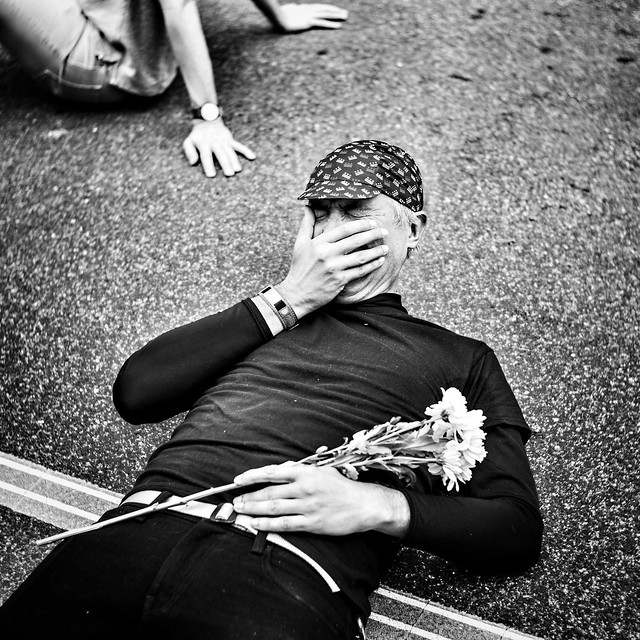 Life moved on, but slowly. I missed a week of work, thanks to understanding supervisors who knew I needed to grieve. The following week’s Downtown Breakaway was a rolling tribute to Dave. I rode his Bianchi. It made sense at the time (and Jean generously let me ride the bike).

There were self-destructive tendencies under the surface, but they morphed into constructive ones over time. The community of friends new and old was there. We all leaned on each other. We somehow made it through the summer. Days turned into weeks, weeks into months. Life carried on, though it was – and still is – different.

Now it’s been a year. I’ve had a lot of time to reflect.

How has it been that long?

I regret that I wasn’t at the Downtown Breakaway on April 17. I had a local governmental committee meeting to attend that evening, so after I sent off the group I did my civic duty, rejoining my bicycling friends at our local watering hole afterward. Dave and I talked with our friends over a beer.

I missed that ride. I wish I hadn’t.

I miss riding with Dave. I miss having coffee, beers, and bread with him. I miss talking about life and all of its quirks, joys, irritations, and contradictions. I miss his ability to weave a convincing advocacy narrative. I miss being able to bounce ideas off of him. I miss musing about music with him (we were supposed to go see Nick Mason a couple days after he died – I went to the show, and I think he would’ve loved it).

Most of all: I miss his unwavering support, mentoring, brotherhood, and friendship. 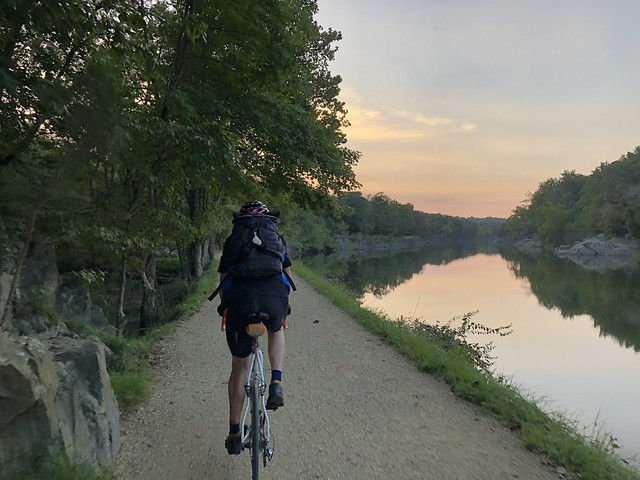 I was encouraged by Jean to forge my own path. Admittedly, after Dave’s death I tried too much to fill his shoes. I struggled to find my own voice and niche in the DC advocacy community. I think I’ve found it, but it’s not entirely what I’d envisioned. I guess it’s still a work in progress. Life is a constant work in progress, so I shouldn’t be surprised.

So thank you, Jean. If you read this, know that you made a difference. And I apologize if this advice made me forge a path that turned so introspective that I became distant. I hope to make up for this over time. You and Ophelia – and Diego, who was the most supportive kid I’ve ever seen in a time of adversity – are in my thoughts a lot.

And Dave: I miss you. I really, really miss you. 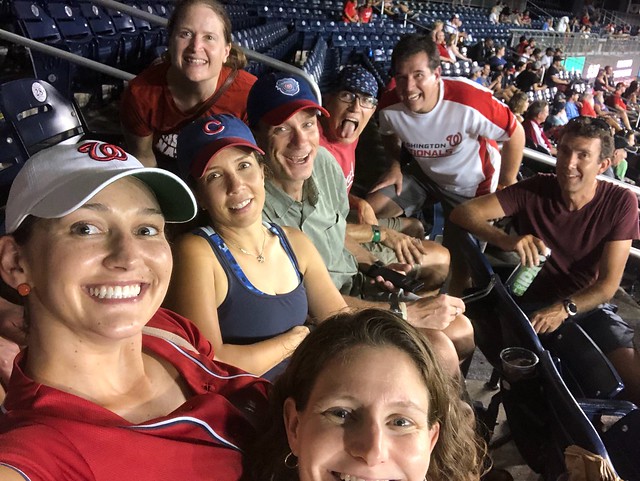 Life has rolled on. I lost a job. I survived a challenging ski season and forged new relationships in the ski racing world. Friendships were forged and strengthened. Life was assessed. Love ruled in the end. It always does.

The other day I was riding at Hains Point, which is a really quiet place during this COVID-19 pandemic. It allowed a lot of time for introspection and reflection. My thoughts drifted to the times I rode with Dave down there. There were times we rode there after work, just turning laps because we could. There was the 2018 Hains Point 100, an exercise in absurdist riding in unrelenting, bitterly cold rain. We laughed because there was nothing else to do, so miserable was the riding. We may have lasted 30 miles, at most. 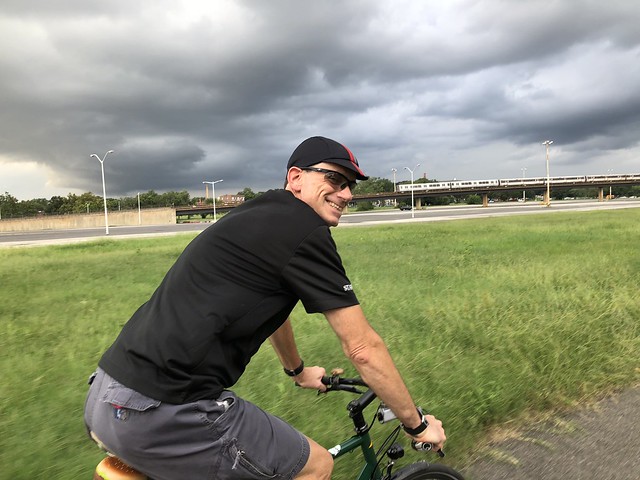 As I pedaled along, a song spun up on my iPhone that opened up the water works. That song was Paul McCartney’s “Here Today,” a song he wrote as a letter to John Lennon less than a year after Lennon was murdered in NYC. The tone and lyrics just hit me right in the gut, and I turned a weepy lap as I sang along (likely atonally as one does when crying):

“And if I said I really knew you well
What would your answer be
If you were here today?
Oooh, here today.

Well knowing you, you’d probably laugh
And say that we were worlds apart
If you were here today.
Oooh, here today.

But as for me,
I still remember how it was before.
And I am holding back the tears no more.
Oh, oh, oh,
I love you.

What about the time we met?
Well I guess that you can say
That we were playing hard to get.
Didn’t understand a thing
But we could always sing.

What about the night we cried
Because there wasn’t any reason left
To keep it all inside?
Never understood a word
But you were always there with a smile.

And if I said I really loved you
And was glad you came along
Then you were here today
Because you’re in my song.
Oooh, here today.” 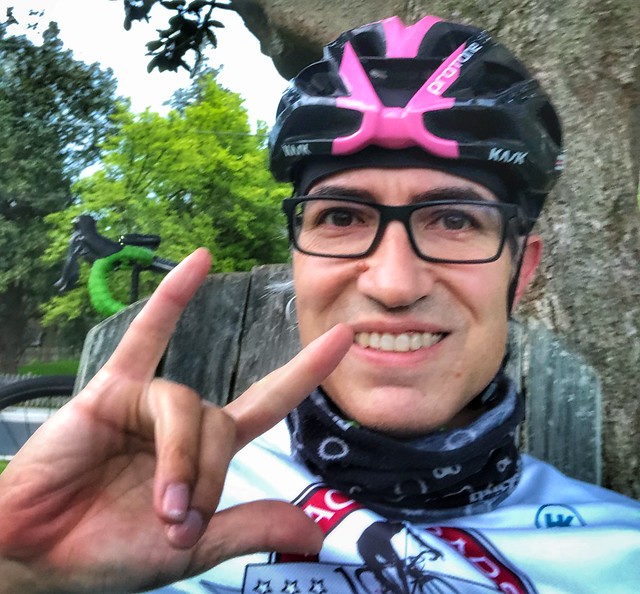