Okay, since I’ve promised a trip report for some time, and now that I’m back in the swing of things here in DC, I might as well start the recap.

The day before departure, the eastern seaboard experienced a rather nasty snow and ice storm. It wreaked havoc with travel, both within cities and nationwide. Many people heard about the JetBlue debacle, where some passengers were trapped in planes on the tarmac at JFK for over 10 hours. 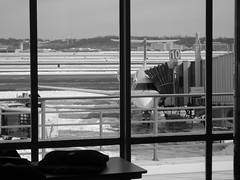 Needless to say, by the 15th, most everything had been cleared up. However, a lot of flights were still delayed due to the ice event on the 14th. My flight from DCA was about 40 minutes late because the Continental Airlines jet that was doing the route was slow coming from Newark.

But I still arrived in Newark with plenty of time to spare – almost 3 hours before my flight to London. However, my mom’s flight from Salt Lake City wasn’t as fortunate.

She had a non-stop flight into Newark on Delta. While Delta is a codeshare partner with Continental, they aren’t quite an equal. Because of the backlog of flights into and out of Newark (EWR), her flight ended up delayed in arrival by almost two hours.

This was problematic. Her flight from SLC eventually arrived at 6:28 pm. Our flight to London, on Continental, was scheduled to leave on-time at 6:50 pm.

You know how they give those warnings about arriving at least one, if not two, hours before an international departure? Well, let’s try 22 minutes, in which time mom needs to get off the Delta flight, get loaded onto a wheelchair (wonky hip), meet me at Terminal B security, go from Terminal B to Terminal C via a cranky AirTrain, then through security, onto an electric cart to gate 98.

It was a herculean task, and the airport attendants really went the extra mile. They raced mom to Terminal C, and cut us through to the front of the security line. Our cart driver whizzed us to gate 98, where the gate agent said that the flight was closed. I begged and pleaded with him to see what he could do, as I’d found that later flights (both on Continental and other airlines) were mostly full. 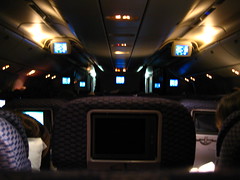 As luck would have it, there was a late luggage arrival onto the London-bound Continental jet, so we made it onto the plane! Granted, one of our seats (mine) had been re-assigned, so I got to pick my place. Better yet, we were allowed to take all of our luggage onto the plane, even though I was over the carry-on limit. While I could’ve sat in business class, I decided to stick close to mom in coach, sitting between some school kids from Southampton, England. So far, so good – and so winded.

About 90 minutes into the flight, the lead flight attendant comes on the intercom, asking if there’s a doctor on the plane. It seems that one of the school kids had some kind of painful distress (e.g. appendicitis, kidney infection, or the like) and was doubled-over in pain. Mom, being a doctor, volunteered. Eventually, a doctor from the UK also turned up, which is good, as mom didn’t know the UK’s drug formulary. Both she and the UK doctor came to the same conclusion (kidney infection), and they administered some pain meds and moved the girl to first class so she could lie flat.

The rest of the flight was uneventful – I watched A Good Year and slept – and the girl felt much better by the time we landed. Both she, her teachers and the flight crew thanked my mom, and Continental rewarded my mom with tens of thousands of frequent flyer miles – yay!

Our connection in London was fairly routine, if long. We had 5-plus hours to wait before the next flight, so we lounged around Gatwick Airport (LGW). Had mom’s hip been better, I would’ve tried to head to London, but it was better that she rest. We also managed to get a quick meal, which was a good decision. 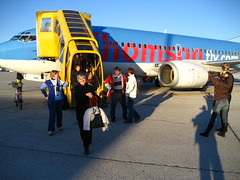 Our flight to Salzburg (SZG) left in the early afternoon on ThomsonFly, which is a budget-line airline in Europe (also known as HapagFly and TUIFly). The airplane was clean and the attendants friendly, but they charged for any and every snack on the 1:48 flight. Even a simple water wasn’t free – talk about cost cutting! But it wasn’t too bad, and we arrived in Austria without any troubles.