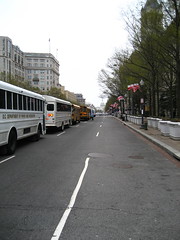 Apparently the marching orders were issued by Mayor Fenty at 2:30 sharp.

That’s not good for sprite and me, as we got to Freedom Plaza at 2:50.

We’d seen a few people heading down into the Metro Center station with rally paraphernalia – signs, badges and t-shirts – but didn’t really think that the rally would be over so soon – after all, political time in DC is relative, and seldom ever punctual. So we headed into Caribou to buy some warm beverages.

So when we arrived at Freedom Plaza to see a line of buses heading down Pennsylvania Avenue, we were disappointed. Sure, it was windy with spotty drizzle, but were all of the marchers so weak?

We decided to walk down Penn (mailing our taxes along the way). While there was certainly a long line of buses, there weren’t many people marching toward the Capitol building. Is this the new model protest march? 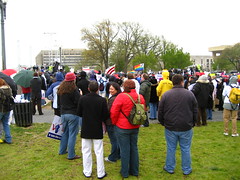 When we arrived at the Capitol reflecting pool, a crowd of 2,000-or-so was amassed, and leaders were speaking from the dais. There were some chants of “free DC” and “voting rights now,” but it was a rather uninspiring sight and sound to these eyes. Where were the massive crowds? Where were the congressmen who were scheduled to speak?

Where was the outrage?

The speeches wrapped up by 3:30 – half an hour before they were slated to begin. What the… ?

Perhaps people were just there to get the t-shirt, sign, or badge, and then leave.

Or perhaps in Mayor Fenty’s DC, civil disobedience runs on a tight schedule.

ETA: according to photo evidence, there was a march. But it sure doesn’t look like it was much of a crowd that marched – I’m betting that more than just seniors boarded the myriad buses that followed the marchers.

So my conclusion still stands.

marching for a vote