On paper, it’s big: long, with lots of climbing. Two of the climbs are Cat 2, one is Cat 1, and one is hors categorie – the toughest of the tough, in terms of pro cycling. The lowest altitude of the ride is higher than over 90 percent of the riding we do here in the east.

And it was a helluva lot of fun!

But let’s backtrack to August 1, when most of us traveled to California from DC…..

August 1:
Spent most of the day cleaning, disassembling and packing my bike in its new travel case – a Pika Packworks EEP. The process was simple, and the bike was securely cradled by all the padding and straps. sprite drove me to Dulles Int’l Airport, where I joined the jetBlue queue. Ed and Chris arrived while I was still in line to check in.

I arrived at the counter with my pre-printed boarding pass. The man behind the counter asked, “is that a bike?” when he saw my EEP. I said yes, he said “cool,” and that was that. No extra charge to check the bike! None of my fellow jetBlue travelers with bikes were privy to the same luxury – must be the unique case.

The flight to Oakland was non-eventful, and most of us (Ed, Chris, Jonathan, Tracy and I) stayed at a local hotel for the night.

August 2:
The next morning, we awoke, ate breakfast, and went to fetch our two minivans from the Oakland Airport rental car facility. One catch: they had only one minivan available! Fortunately, with only five people in our group, we were able to make do with one minivan (a Kia Sedona) and a crossover vehicle (a Suzuki of some ilk). After loading our stuff into the vehicles, we drove north, out of cool Oakland to the hot and dry Central Valley. We met up with Glen and Liz at a rest stop – a complete surprise, as we had originally planned on meeting them up at Mt. Shasta. 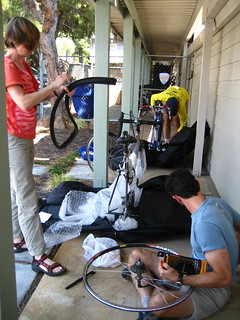 We’d agreed to stop at a bike shop along the way, to reassemble our bikes in close proximity to a repair facility on the off chance that damage might occur during transit. We settled on The Bike Shop in Redding, a wonderful, family-run shop with a lot of personality.

As we unpacked our bikes and reassembled them, Ed noticed something awry with his front wheel. What looked like it might be a hub issue was actually a bent dropout on the right-hand side of the fork – yikes! Luckily, the shop’s owner is a former defense department metallurgist, and was able to get the fork (a carbon model with aluminum dropouts) back into working order, and things seemed to be okay. The rest of us encountered no such problems.

After a filling lunch and coffee at YAKS, we motored north toward Mt. Shasta. We soon encountered the foothills leading toward Shasta Lake, which is very, very low after seven years of drought. We marveled at Castle Crags to the west (“looks just like the Dolomites,” remarked Jonathan), and soon caught sight of our objective: Mt. Shasta!

It was somewhat obscured by latent smoke from the Trinity fire complex, and a cloud clung to the peak. But it’s a huge mountain, one we would partially scale in 24 hours’ time.

We checked into our hotel, checked into the ride, and got dinner at a local “Italian” restaurant. The food wasn’t very good, but it was plentiful and the staff very genial. Upon leaving the restaurant, we found the whole town inundated with thick smoke from the Trinity fires – not a good sign, especially considering that we had a couple of asthmatics in our group.

We returned to the hotel via a grocery store (to buy breakfast and on-bike provisions) and hit the hay – our ride was to start before dawn.

August 3 – ride day:
The alarm went off at 4:15 am, and I managed to drag myself out of bed to make a pot of coffee and eat some cereal. Chris awoke shortly thereafter, and we both prepped for our ride. A quick check outside revealed two things: it was chilly (perhaps 50 degrees), and the wind was from the south, clearing the smoke layer.

We piled in the cars for the very short drive to the ride start (none of us had proper lighting, front and back, to ride there safely). At the start, we made last-minute adjustments to clothing, used the loo, and were out of the parking lot at 5:39 – just after the start of civil twilight. A few of us had rear blinker lights, and had them on to help ensure safety on the roads, though precious few cars materialized. All was going well, at a leisurely warm-up pace….

…..until mile three, when I tried to upshift and my rear derailleur cable slipped, shooting the pulley cage into my spokes. I immediately let up on all pedaling pressure and stopped to assess the damage: a bent derailleur hanger and a warped pulley cage. Ugh!

Luckily, I managed to get most of it back in order with a few tools and a bit of sweat. A fellow rider, Daniel (from the USCG air station in Sacramento), provided advice that was most welcome. After about 20 minutes of fussing, things were working well enough: I couldn’t shift to my high gear (11-tooth cog) or my lowest gear (25-tooth cog), but the other 8 cogs shifted without incident. My ride was saved!

And I was angry. And nothing fuels a burst of speed like anger. It wasn’t a raging anger – more like a slow, burning anger than slowly dissipated. It propelled me away from my fellow ride mates, leaving me alone off the front for the first big climb: Park’s Creek. It’s a 15 mile grind at a fairly consistent 5.5 percent grade, and quite the wake-up call. I set into a rhythm and started passing a lot of people. I kept passing them until I reached the top, where I took a quick bio break, reloaded the water bottle (the second bottle contained a concentrated mix of Accelerade, HEED and Lipton Iced Tea), had a banana and took off on the fast downhill. On the way down, I cheered on my teammates as I passed them.

The next stage of the ride was mostly flat, and took me through the town of Weed, over a small pass, and through the beautiful Shasta valley. This 20 mile stretch was a nice rest break. 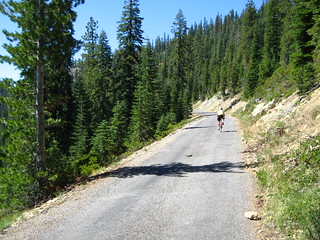 But the rest ended with the climb up Mumbo Pass. This pass had the steepest overall profile (6.5 percent average grade), and a few sections of 11 and 12 percent grades. Furthermore, it featured some rough pavement that would prove quite jarring on the downhill. As I climbed this road, I passed turn-around points for the shorter ride distances offered by the ride organizers, and enjoyed the scent of pine trees – a reminder of childhood summers spent in the Wasatch and Uinta ranges in Utah. I still felt strong on the climb, and powered my way through the steepest sections. Again, I made a quick turn on the summit (bio break, refill the water bottle, eat some salt potatoes and a banana).

After the rough-and-tumble descent – one which claimed Ed’s handlebar, which cracked just to the left of the stem (he splinted it with a stick and managed to finish the ride, riding the remainder of the descents with effectively one arm) – it was an immediate right turn onto Castle Lake Road, which was a smooth, short climb that started out steep. The strain of the Mumbo descent made me feel like crap climbing Castle Lake, but I managed to make it up in good time, and took a slightly longer break, dipping my feet in the icy waters of the lake (ahhh!).

The decent from Castle Lake was fast, and brought me to the lunch stop at the Mt. Shasta Club at mile 102. I didn’t spend too much time here – maybe 15 minutes – and I ate a couple of sandwiches: PB&J and turkey, cheese and avocado, both of which hit the spot. I drank a Pepsi and a Hansen’s root beer, and refilled both bottles (the slurry bottle was empty, so I refilled it with Gatorade). After crossing the road to use the port-o-let, I was on the road for my final climb: Mt. Shasta.

I crossed through the outskirts of the town of Mt. Shasta, as the road rose in front of me. Mt. Shasta is a long climb on a silky smooth road. Averaging 5.5 percent for the duration, it starts steeper (7 to 8 percent) and slowly levels off as it rises, with a small kick up near the end. Much of the climb is exposed, though there’s plenty of thick pine forest to provide needed shade along the way.

And then there were the butterflies.

Mt. Shasta seems to be a wonderland for butterflies, and they were everywhere on the climb up. It made for a lovely distraction, and while I was feeling very strong, it was a welcome change of scenery. I powered my way up the climb, appreciating the cheers from the volunteers at Bunny Flat, and doing a standing sprint for the last half-mile to the summit. 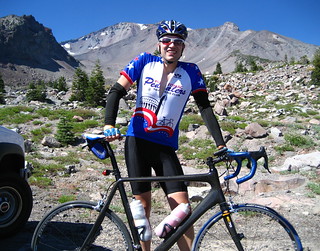 It was quite the personal victory – and quite chilly, as well. I quickly donned my arm warmers and, after a quick lemonade and a picture, I enjoyed a fast descent, hitting 49.5 mph for a time. Again, I cheered on my friends as I passed them on the downhill.

The last 13 miles of the ride were all downhill. In fact, had the route not required a stop to cross a major road, pedaling would not have been truly necessary (though I pedaled to keep my legs moving and to milk as much speed from the descent as possible). Just before 4:00 pm, I pulled back into the park.

I spent my post-ride time refueling, getting a full body massage, and waiting for the others to return. All of them did, having conquered the Shasta experience as well.

You can see my photos from the ride here.

at the base of a big mountain