My usual ride reports on this blog are of a more “epic” proportion: long distance, plenty of climbing, tales of extreme endurance. 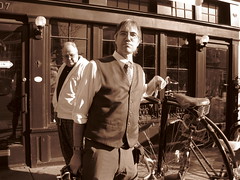 This is certainly not one of those! Indeed, this is a story about a more leisurely ride that resided entirely within the District of Columbia: the First Semi-Annual Washington DC Tweed Ride, organized by DC’s own “Dandies and Quaintrelles” club.

The basic rules of the day were:

The organizers of the ride likely had no idea of how popular such a ride would be. It helped that Sunday was a postcard-perfect weather day: clear skies, low humidity, and a high of 72. So when over 250 riders showed up at the appointed starting point (behind a PNC Bank on 8th Street NE), it was a cause of both celebration and (for both organizers and riders) a bit of confusion. As the ride came together so quickly and loosely (with PR largely by word-of-mouth and mentions on local cycling and hipster websites), there wasn’t a formal registration process – something that was clearly evident given the bottleneck to pick up liability release forms and cue sheets.

sprite and I had rolled in from Dupont Circle (scaling our biggest “hill” of the day along the way: the viaduct over the tracks at Union Station), and met up with Michael and his famous borrowed bicycle. We all soaked in the atmosphere: lots of tweed, wool, knickers, frocks, hats, pipes and tea sets were on full display as we awaited our turn to ride.

Around the turn of noon, we were off (dig my knickers, vest and argyle-patterned helmet – thanks to Eric Gilliland of WABA for snapping the shot)!

The route was a meandering path through DC: through the Capitol Hill neighborhood, down to the National Archives and Penn Quarter, then to the White House and up to Dupont Circle, eventually finishing at 14th and U Streets NW at Marvin, a lovely tavern. 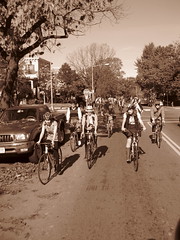 Our spirited group of 25-or-so riders was in good spirits throughout. As I was one of the few who had a cue sheet, I was appointed the “leader” of our pack (though we had the person who cued the ride in our midst, so the likelihood of wandering off track was nil). Our average speed was in the neighborhood of 7 miles per hour, and we caught the eye of many passers by, most of whom were charmed by the sight of so many people, dressed to the nines, enjoying a scenic roll through town.

We smiled and laughed. We conversed. Folks took pictures and filmed the merriment. We waved and smiled at pedestrians, motorists and fellow tweed-free cyclists – as was said many times: this was not a race, but a parade (of sorts). Folks on Segways and street hockey players made way for us, and we thanked them for their courtesy. According to a few reports, Michelle Obama met some of the earlier tweed riders as they passed by the White House – very cool. 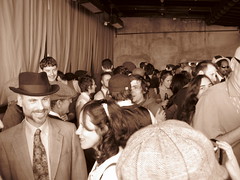 The 6.6 miles of the DC Tweed Ride went by very quickly, even at a deliberately slow pace. We rolled in at Marvin to see a mass of bicycles of all makes, models and vintage, with riders wandering in any out of the tavern. Inside and on the roof deck, gin fizz and good beer was enjoyed by many.

As for us, we picked up lunch around the corner, as we had arrived too late to get brunch at Marvin. Pity, that. And that brings me to the one gripe I had about the ride: it ended at a location that wasn’t made to accommodate such a large group of riders. Perhaps reversing the route, ending at a theatre or a park where a band can play, people can stretch out and more food can be served – that would make the ride even better.

But as it was, the First Semi-Annual Washington DC Tweed Ride was a superb way to spend a Sunday afternoon. I can’t wait for the next installment of the ride come springtime.

In the meantime, the rest of my photos from the event are here, sprite’s are here, and still others are here. Also, be sure to enjoy Michael’s film of the event:

sick to my stomach