This ride proves that there is always something more difficult to do on a bicycle. 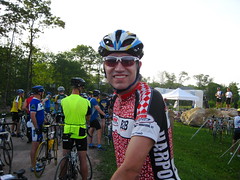 Since it’s unlikely that I’ll be riding the Great River Ride this year, I decided to add another longer challenge ride to my 2010 schedule. That came in the form of the Garrett County Gran Fondo, specifically the “Diabolical Double” route: a 126-mile route that climbs and descends river-cut ridges through the Maryland panhandle and parts of northern West Virginia. It’s a route that few have ever completed, and this year the organizers of the Savageman Triathlon decided to stage an organized ride on this route to test the mettle of local endurance cyclists.

I didn’t enter into this ride lightly. Friends familiar with the area said that the terrain was extreme, and that every climb would have a sinister element to it: steepness, exposure, road surfaces conspiring against progress. Naturally, this meant some breakneck descents, tempered only by the prospect of gravel washed over the pavement due to recent torrential rains. There was also the factor of distance between checkpoints/aid stations, which meant the possibility of running out of water or food at later points in the ride. 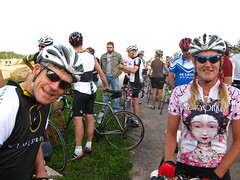 But this ride still proved inviting. The prospect of beautiful terrain (including the “Westernport Wall,” a 31% climb that’s featured in the Savageman race) and riding with good friends, Mariette and Rick, in an area that I hadn’t explored outside of winter months was too much to pass up. And I’ve been climbing really well on local sinister roads like Massanutten, Coxey Brown, Francis Hollow and Park Central, so I felt ready to give this ride a go.

And it was truly diabolical.

To quote (and second) Mariette:

“[The DD] is is the hardest thing I have EVER done on a bike, and I have done some hilly doubles and some hilly centuries. This thing is like doing Naked Mountain, then Massanutten, then Vesuvius and then doing them all over and over and over until you get 126 miles. But the scenery was kicker.”

She was right. And Rick added the following in a message to Kyle Yost, the course designer:

“I’ve done the Mountains of Misery Double Metric Century five times, and your ride is consistently harder… Same amount of climbing, but the Diabolical Double takes an additional two hours of a serious suffer fest. I really enjoyed the flat section at the end am only too thankful you didn’t chart a final climb any more vicious than you did… I assume you simply couldn’t find one.”

A quick summary of the course: starting from the top of Wisp Ski Area, the ride begins with a fast descent (I hit 57.1 mph on this first stretch – some nearly hit 60), then gives you a taste of the climbs to come about 10 miles in: a 1/2 mile stretch at 15-16%. From there, the hills became more and more extreme, adding fuel to the fire. It got to the point where 10% seemed like a mild climb and not something that, on a normal club ride, would be groused at. We hit 20-21% at least 6 times on this ride. There was also a 1.5 mile long dirt stretch, the last 3/10 of a mile being a 13-14% incline – more a job for a mountain or cross bike than a road steed, but we made it up, all the same. 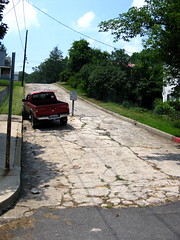 And then there was the Westernport Wall. It was an optional climb, not officially part of the course, but as Kyle said in the pre-ride briefing: you’re there anyway, so you might as well climb it. It’s a one-block-long stretch of poorly-paved road that is 31% for all but the last 10 feet of its length. Other than the residents who live on the road, nobody is allowed to drive it in either direction. In the Savageman Triathlon, any competitor who scales it without falling or dismounting gets their name on a brick at the climb’s summit.

And so I did – and I killed it! And truth be told, it was one of the easiest climbs on the ride, given the parameters are known (e.g. distance from bottom to top).

In Westernport was the fourth of five checkpoints on the route. The organizers required riders to check in at every checkpoint, such was the brutal nature of the ride. At certain checkpoints, it was possible to choose a shorter route, though checkpoint three is the “make or break” if you wanted to shortcut down to the 102-mile route. The checkpoints were well-staffed and equipped with plentiful food, water, HEED and ice (that last one was important as the elevation dropped and the temperatures rose – in Westernport it was 92 degrees, the hottest point of the ride).

The other challenge was that, after Westernport (mile 84), the next checkpoint wasn’t until mile 110, and there were three long, difficult, mostly-exposed climbs through West Virginia before said stop. Furthermore, this course is remote, and there are precious few convenience stores or vending machines along the way.

So when I started running out of energy around mile 92, I became a bit concerned. I slowed down my pace, which helped, but my bottles (even the slurry one) were dangerously low as the heat and sun exposure took their toll on me. Luckily, the town of Deer Park installed a spring water spigot at mile 103, and I made it there shortly after my bottles had run dry. I spent about 15 minutes at that spigot, dousing myself with the icy-cold water, refilling my bottles and eating some granola bar and energy gel. I felt renewed and carried on, Mariette and Rick ahead of me now due to my flagging energy. 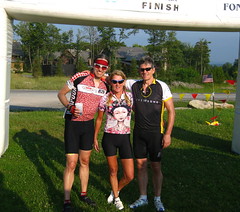 The remainder of the stretch to mile 110, and indeed to the finish at mile 126.88, went well: I rode strongly (and solo) for the remainder, and climbed the final hill up to the summit of Wisp (the lower half of which is a 14% grade) with strong legs, sprinting through the finish.

Yup – almost two hours of stoppage time. Some of that was to take pictures, some was waiting for Mariette and Rick at the checkpoints, some was necessary recovery time. But it was necessary, as this wasn’t a ride to take lightly.

You can see a set of the pictures I snapped on the ride by clicking here.

getting diabolical (and other thoughts)