Here’s a summary of what’s been going on in my life of late:

Over the long weekend (a.k.a. Columbus Day weekend – or “Insanely Politically Incorrect Federal Holiday Weekend”) sprite and I went to New England for three things: a wedding, visiting family, and a bike ride. We got to see her best friend, Karen, marry her sweetheart, Michael, in a lovely outdoor ceremony in Massachusetts. I got to hang out with Sam and Alexis, which was an all-too-brief treat. And I got to sample both the T and Amtrak, connecting the two in Boston – go, railroads!

That same weekend, I rode the Great River Ride in western Massachusetts. I’ve done this ride twice before, though both previous times the ride was my big ride of the year. Given that the Shasta Summit Super Century filled that role this year, I was past peak form at this ride – and it showed. It didn’t help that I was out late at the wedding the previous night and was a bit short of sleep and proper nutrition as a result, but I wasn’t as fast as I was in 2007. And I didn’t really care, as it was a beautiful day for riding and simply enjoying being outside in the beautiful foliage. 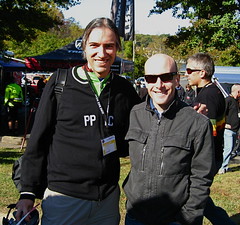 This past weekend, I got the chance to catch up with an old friend: Levi Leipheimer. Most of you may know him as one of the greatest professional cyclists in the United States, who won the bronze medal at the Beijing Olympics, who placed second in this year’s Vuelta a EspaÃ±a and third in last year’s Tour de France. I know him as a former teammate at Rowmark Ski Academy, back when we were both alpine ski racers out west. It was fun to see him and catch up on life – small world.

I also got the chance to try out the new Shimano Dura-Ace Di2 bike drivetrain, which features electronic shifting. It’s very slick, and had this Campagnolo user convinced that this could be a big deal. Campy is working on something similar, but it looks like Shimano will beat ’em to market.

sprite and I continue to prepare for our upcoming trip to France. This involves a lot of house cleaning (we don’t fancy returning to a messy apartment, though I’m sure the cats will try their damnedest to ensure that some things will be out of place), some half-baked attempts at brushing up on my French (thank you, podcasts and French radio), and narrowing down wish lists of things to see and do.

All the while, I’m hoping that Obama can keep the momentum and win this election. It’s not going to be easy, given that the RNC and McCain campaign are throwing everything on the table to try and discredit Sen. Obama. It’s pathetic, but it’s also effective when aimed at people who don’t take the time to learn the truth about claims laid out in smear campaigns. 12 more days – keep up the good, aggressive, positive fight, Barack and Joe!

vanity will get you nowhere