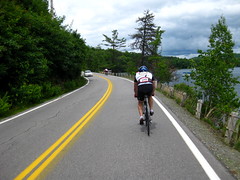 This is the big ride of 2009 (at least according to my current schedule), and it comes far earlier than last year’s big ride out in California. This ride differed in two key respects:

1. It was a longer, point-to-point ride with less climbing; and
2. There was a lot of beer involved at the end.

This ride is sponsored by Harpoon Brewery and is a fundraiser for charities near and dear to them (they are highly involved in helping out in New England). The entry fee is steep, but with it you get a cool jersey, great support (including the Mavic neutral tech support cars and motorbikes), and an end-of-ride BBQ featuring a lot of Harpoon beer.

The morning started off in Cambridge, where sprite and I were staying with our friends, Sam and Alexis. We had to get up early, as I had intended to start the ride at 7:45am and need to be at the brewery at Boston Harbor by 6:45, at the latest (according to the info packet I had). However, even on a sleepy Saturday morning, traffic doesn’t move slowly through downtown Boston due to poorly-timed traffic lights. On the way, we made a quick pit stop at a Dunkin Donuts in downtown (sprite made the fastest stop for coffee, OJ and a bagel I’ve ever seen) and made it to the brewery by…. 6:50.

Most riders had already embarked on the course, as the slowest riders were sent on their way at 5:45am. I was planning on riding with the 20mph group, but decided that maybe the 19mph group was a better fit, given my high level of fluster heading into the ride. It certainly caught sprite off-guard, as I left at 7:35, about 10 minutes earlier than originally planned. But she was sweet to drop me off at the ride start.

I ended up in a group of 20-or-so riders, most of whom either were members of the Team FuelBelt triathlon club or the Monsters In The Basement cycling club. I ended up slotting in with the Monsters, who were a group with a similar personality to my PPTC “wrecking crew” – it was a good and serendipitous teaming, as they invited me in to their group for the duration of the ride.

The route isn’t overly complex, as it basically stays on five major roads: Massachusetts routes 225 and 119 and New Hampshire routes 63, 12 and 12A. Yes, there are many forks in the road and other, smaller roads used, but over 85 percent of the ride features the aforementioned five routes. The entire cue sheet fits in one column on a single side of standard letter paper – that’s how easy the course is, in terms of linear routing.

And the climbing on the ride is fairly mellow. There are many rollers of various size, and a gradual rise into New Hampshire the account for the ride until mile 90. At this point, in Hinsdale, NH, the ride turns north onto NH63 and a climb called “The Leviathan” by the ride organizers. It’s no slouch of a hill, averaging around 4 percent for its duration, with a few stretches of 7-8 percent before its “summit” at mile 94. After this, the rest of the ride is rolling, including a covered bridge crossing of the Connecticut River a mere four miles from the finish.

I must have prepared well for this ride (indeed, I told sprite the previous weekend that I was ready after riding a really strong-yet-controlled pace for two consecutive 65-mile rides): I ate well and hydrated myself just enough. The bike, my Jamis Eclipse, was in great shape, with new tires and a more aggressive riding position that mirrors the Pedal Force (my usual road bike). And I had a good amount of rest.

And it showed on ride day. I was always in good spirits with a lot of energy in the tank. My first rest stop, at mile 52, was a bit longer than I’d like, but it went well, with a lot of free Clif Shot Blocks available (I stuffed my jersey with the things – they’re tasty). At mile 56, we called the Mavic cycle to aid a cyclist whose loaner wheels (from Mavic) weren’t holding air. And the third stop at mile 89 was unplanned, but one of the Monsters met up with his family at this stop. Stopping near the bottom of a climb is usually tough, but we made this stop quick and got on our way.

The Leviathan was tough, but I set into a spin pace and did just fine with it. Our group would reconnect after big features like this, which was for the best and kept folks’ spirits high. The next official stop at mile 97 featured musette bags with goodies and water, but the way it was setup didn’t allow for a smooth, pro-style hand-up, so we stopped to use the loo and refill bottles. 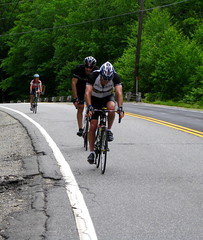 At this point, we were rejoined by the FuelBelt triathetes, which was an interesting experience. First, we ended up with a monster-size paceline of 16 riders. And of that group, only the Monsters and a few of the tri-folk were taking pulls (mostly by choice on our part, as we scoped out the FuelBelt riders and found that most weren’t the best paceline riders). It could have been irksome, but two of the FuelBelt riders took great, strong, steady, long pulls for the group. And they happened to be the only two women in the group – and one of them had never been at the lead of a paceline before. It certainly didn’t show, and we averaged almost 24mph for the 26 mile stretch to the final fuel stop of the ride before Vermont.

At this point, a few of the Monsters were shelled from the crazy effort we’d just made, and we all welcomed the cold sodas and fruit and the salty pretzels at the rest stop. Never before had a Pepsi or Mountain Dew tasted so good! We refueled and stretched, and let the FuelBelt crew ride ahead, as our group wished to stay together. And I admit, I got jumpy as we neared Windsor, and jumped ahead of the group until the covered bridge crossing of the Connecticut River, where I stopped to take a picture of the sign over the bridge. Regrouping in downtown Windsor, we rode together for the remainder of the ride to the brewery.

After 148 miles, the journey was complete! And my legs were ready to ride another 30 miles, at least – as I said earlier, I was prepared!

But the lure of a hot shower, a massage, fresh barbeque and cold beer was too much to pass up. It was a fitting end to the ride, and sprite met me a short while after I finished to give me a ride back to her folks’ place in Connecticut.

It was an awesome day and a superb ride – one that I’d happily do again, though I’d want to bring a few more of my PPTC friends to share in the experience.

(Click on any of the pictures to see my full set from the ride. Click here to see a full album from Will Williams of the Monsters – you’ll see more pics of me riding there.) 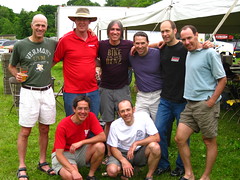 I really need to mention the debt of gratitude I owe the Monsters for their overall support of me. Their club support driver, Ian, provided me with water and soda along the way, treating me as a member of the team the whole day. It was really great, and made the whole day much more special. And to Peter, Will, Philip, Dan, Dave and Todd, a tip of the hat to y’all for being so nice to a stranger from the south. C’mon down to this area for a ride sometime: Mountains of Mistery, Mountain Mama, Civil War Century, you name it!

a glutton for punishment