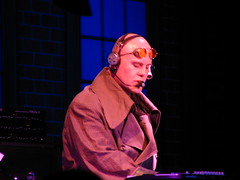 A few bits of randomness for this week….

I’m now 12-for-12 in terms of getting on the bike in May. Even yesterday’s rain didn’t stop me.

On Monday night, I went to see Thomas Dolby at The Birchmere. It was a terrific show for two reasons: first, he’s a great musician; and second, a good friend of mine from Connecticut College is his tour manager. So I got the best of both worlds: great music and a chance to catch up with Lunesse. What’s not to like?

The show featured a lot of tracks from throughout Dolby’s career, and while he included his two hits – “She Blinded Me With Science” and “Hyperactive” – he mostly played deeper cuts that are more powerful and less kitschy. In particular, “Budapest By Blimp” and “Flat Earth” were really great in a live setting. He also showed complete mastery of his tools, showing how well he can push a Mac to its limits. And the intimate venue of the theatre at The Birchmere was the ideal size for a concert that felt like it could’ve taken place in my living room – totally great. I snapped lots of pictures, which was fun.

(Oh, and the opening act, Carey Ott, was great too, with tight harmonies and excellent songcraft.) 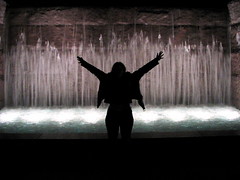 After the show, Lunesse and I got to catch up some more, and I got to give her a brief break from the tour by giving her a tour of some of DC’s monuments by night. We visited the Jefferson Memorial and the FDR Memorial, and just had a good time catching up on life. And because it was late, we essentially had the monuments to ourselves – really cool. Lunesse lives on the west coast, so we don’t get together as much as we’d like, so little visits like this are really special.